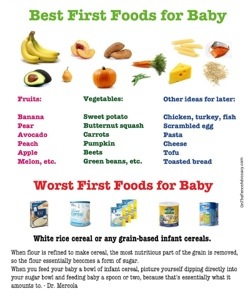 This is the ingredients of rice cereal taken straight off of the Gerber website.

In my quest to find research based advice on the subject of all things parenting, I am on a mission to read labels. You will notice that this “rice” cereal l actually doesn’t contain rice, but rice FLOUR. Way back when I started my college career, I took a nutrition class. There I learned that on food labels, the first ingredient listed is what makes up the majority of the product. Most consumers don’t realize this. So when you feed rice cereal, you are feeding your baby some flour with a bunch of additives, or fillers. It’s nutritionally void. Better options are available.

Dr. Alan Greene, a clinical professor at Stanford University School of Medicine, is on a mission to educate parents about better feeding practices and, in turn, lowering obesity rates. In his “White Paper” http://www.drgreene.com/ebooks/white_paper_white_rice_cereal.pdf , he states that the first foods that we feed our babies is what sets the standard for healthy eating habits:

“It should come as no surprise, then, that when the U.S. Department of Agriculture and

U.S. Department of Health and Human Services reported in 2011 the top source of

calories throughout all of childhood from age 2 through 18, in this our most obese

generation in history, the top culprit was empty calories from refined grain treats.xxv

babies lacks adequate scientific justification, and given that this practice could be

predicted to result in unhealthy eating patterns that we see throughout childhood, and

given that our current feeding methodologies have been accompanied by an

unprecedented wave of overweigh and obese babies, the time has come to abandon white

rice cereal in favor of healthier choices for babies.”

Additionally, rice cereal is linked to a higher risk of diabetes.

Processed refined grains, including white rice, have been linked to altered metabolic

effects including serum insulin spikes. Could this lead to insulin resistance or even type 2
diabetes?

“That’s just what a 2010 Harvard study suggests. Researchers at the Harvard School of

Public Health analyzed rice eating and diabetes in about 200,000 people. Those who ate

servings of brown rice a week had an 11 % decrease of type 2 diabetes. But the biggest

The reason that this occurs is because the body needs pancreatic amylase to break down grains. Babies do not produce amylase fully until around 18-24 months, and when they are fed rice cereal before that time, it causes a spike in blood sugar levels, which can lead to pancreatic failure & diabetes later in life. Since babies cannot digest rice cereal, it sits in their gut and rots. This can lead to digestive problems, immediate and long term, and can lead to a very unhappy baby, despite the nay-sayers who claim that “their babies ate it and turned out just fine”….just please don’t even get me started on THAT argument! Babies’ guts only contain one carbohydrate enzyme: lactase. This is biological proof that babies only need breast milk until they are at least a year old.

So if we’re not feeding rice cereal, what foods should we start with?
The following health organizations, as well as the CDC, recommend delaying solids until AT LEAST six months, and then solids should GRADUALLY be introduced:
World Health Organization
American Academy of Pediatrics
UNICEF
American Academy of Family Physicians
Australian National Health and Medical Research Council
Health Canada
http://kellymom.com/nutrition/starting-solids/delay-solids/

A recent article in the New York Times http://www.nytimes.com/2013/03/25/health/many-babies-fed-solid-food-too-soon-cdc-finds.html?_r=0 suggests that some moms give their babies food too early to help them to sleep, however, this can be a dangerous practice. Adding rice cereal to a bottle is outright dangerous. Not only is it a choking hazard, but when babies are manipulated into sleeping longer, it greatly increases the chance of SIDS.

I prefer baby led solids (or baby led weaning) for my family. Some of the foods that are considered to be good first foods are:
avocados
sweet potatoes
pumpkin
peas
mangos