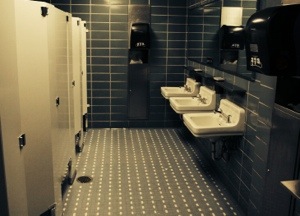 A Fall River, Massachusetts breastfeeding mother who was prepared to meet her civic obligation as a juror in district court last week was told by an officer of the court to pump breastmilk for her 5 month old baby in the restroom.

Although there are no laws to specifically exempt breastfeeding mothers from jury duty, according to the Massachussetts Trial Juror’s Handbook, jurors “have the right to reschedule your jury service to a date that is convenient for you, up to a year from the date you were originally summoned.”
Nonetheless, nurse & first time mother Colleen Swanson, who was at the time unaware of the hardship extension clause, showed up for jury duty prepared to pump for her baby during their absence, but reasonable and sanitary pumping accomodations were not given to her. Mrs. Swanson told me that apparently this is not the first time that a breastfeeding mother has been asked to pump in the restroom since the officer didn’t seem taken aback when she asked for a place to pump and immediately directed her toward the restroom and even gave her an extension cord to use.
She was told by a local reporter covering her story that a representative from the court stated that had she complained, she would have been given better accommodations.
Thankfully, Mrs. Swanson was not impaneled, which is a good thing since the case involved was a murder trial!
I doubt that, given their lack of sensitivity in regards to a sanitary, private pumping area, they would have been accommodating for a mother who has to step out to pump every couple of hours.

So what’s the big deal? The bathroom isn’t so bad, and at least it’s a private place, right?
WRONG!!!!

Let’s just put this matter into perspective with peer reviewed research, shall we?
Raise your hand if you refuse to even sit down on a public toilet seat? I canter into a public restroom and proceed to squat over the seat, being very careful not to touch the germs that I know are lurking there. (Ok, most of the time I do use the seat covers & sit down…I just said that to make the point that we already know that bathrooms are gross) I flush with my foot, and after I wash my hands, I keep my paper towel so that I won’t have to touch the germ-laden door knob. But according to the research, toilet seats are the least of our worries…
New research conducted by microbiologist Dr. Charles Gerba of the University of Arizona, showed that the average toilet paper dispenser has more than 150 times the amount of bacteria than the average toilet seat. Paper towel dispensers were found to have over 50 times more bacteria on average than a typical public restroom toilet seat. Further, this study concluded that toilet plume aerosol (the water & particles that are ejected from the toilet when we flush) could play a contributory role in the transmission of infectious diseases.
That’s right. When we flush, millions of tiny fecal (POOP!) particles are thrust into the air and land on all of the surfaces of the restroom. Have you ever been into one of those mega-fast, overdrive toilets that sound like a jet plane taking off flushed? Can you imagine the “plume aerosol” from those???

A study by the Infectious Diseases Society of America seen here showed that mall, hospital, offices, lecture hall, conference center, department stores, restaurants, airport, and resort restrooms contained “predominant gram-positive organisms including Staphylococcus spp., Micrococcus spp., Bacillus spp., and Enterococcus spp. Isolated Gram-negative microorganisms were mostly Enterobacteriaceae (e.g., Escherichia coli, Klebsiella spp., Cronobacter spp., Leclercia spp., Pantoea spp., Serratia spp.) or non-fermenters. Quantitative cultures documented extensive contamination of all high-touch surfaces. For several restrooms, the quantity of microorganisms was too numerous to count (TNTC), even given our process of counting up to 1,000 CFU/ml. Faucets, soap and paper dispenser operating levers, and the exit door handle of restaurants and aircraft restrooms were more likely to have concentrations of microorganisms TNTC compared with other locations. ”
You read that right: There were so many harmful microbes in the restrooms that they tested, because there was so much bacteria, it was too much to count!
Whoa.
They concluded that “documented extensive bacterial contamination of high-touch environmental sites in 22 public restrooms and aircraft, including a wide spectrum of Gram-positive and Gram-negative microorganisms. Cultures obtained in the restrooms of fast-food restaurants were more likely to have quantitative colony counts TNTC. Cultures of high-touch sites in three restrooms located in different areas of a tertiary care hospital yielded six microorganisms that are responsible for two-thirds of healthcare-associated infections.”

Private, indeed.
Actually, when we use a public restroom, it isn’t a private experience at all. We are subjecting ourselves to all of the bacteria of all of the people who have used that restroom recently, and this poses a serious heath risk, especially for vulnerable individuals such as infants.

A restroom is no place for food, of any kind, and is certainly not the place for a tiny baby to eat!
Knowing all of the dangerous germs that are lurking in public restrooms, would you prepare your food or sit down and eat your dinner there?
Certainly not! So please don’t expect an infant to.

Here’s how you can help:
Call or write the Fall River District Court and let them know that a public restroom is NOT a sanitary place for breastfeeding mothers to pump and respectfully ask them to make accommodations for future use.

Have a boobiful day & leave a supportive comment for beautiful mama Colleen! ❤️