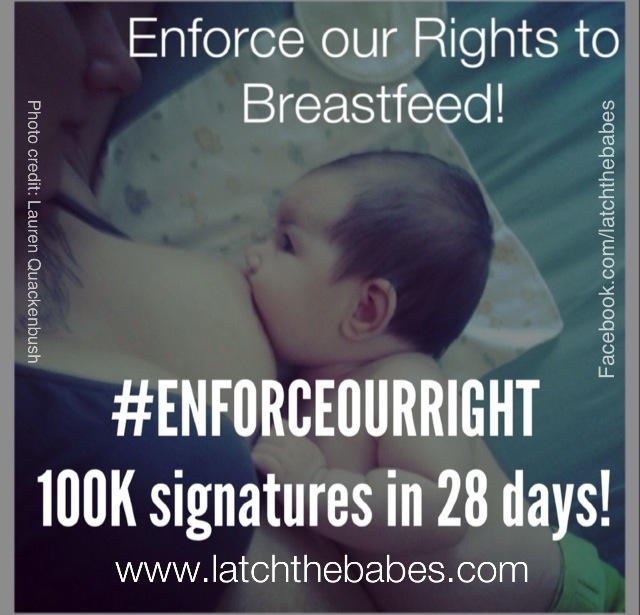 As World Breastfeeding Month comes to a close, I’m reflecting on all of the things that have occurred this month….the positive & the negative.
As the month started out with amazing events such as the BIG Latch On that bring awareness to the importance of breastfeeding & helps to normalize it, which is vitally important as evidenced by the countless women who were discriminated against this month as they fed their babies in public and was asked to cover or to leave.
The negative.
Texas mama Lucy Eades was harassed by an employee at her local gym for nursing her days old baby. This harassment was captured on video by her husband and Lucy received support from around the country after the video went viral on the internet. See it here.
Only a couple of days later, my own La Leche League group was asked to leave our local mall by a security guard because we were breastfeeding in the play area at center court. My post about it on Facebook received 20,000 views, shares, likes, and comments before it was removed by Facebook the following day. See the media coverage here. and Pa.laa’s coverage here.
Fortunately, in both of these instances, an apology was issued and policy changes have occurred due because of them.
Unfortunately, not all breastfeeding harassment cases have been so positive.
Just in case you missed the American Airlines incident, in which a mother was asked to cover & then offered hush money (a whopping $100!) to keep quiet about the incident, read blogger Paa.la’s in-depth story here.

This should not be happening!
Although breastfeeding mothers are protected by law to breastfeed wherever they need to, there are no provisions in place to enforce these laws, which means that until there are, there are no real consequences for businesses harassing or discriminating against mothers.
This will not stop until there are real consequences!
This is why I have decided to team up with beautiful mama Lauren Quackenbush, and am starting the Enforce our Right Campaign
Lauren has started a White House petition urging them to put in place provisions to fully protect breastfeeding mothers rights, and offer consequences to those who do not adhere to the laws that are already in place. See the breastfeeding laws by state here.

The petition seen here reads:
WE PETITION THE OBAMA ADMINISTRATION TO:
Fully protect a woman’s right to breastfeed her child in public, including full enforcement provisions for that right.
Most states (though not all) have laws stating that a woman is free to breastfeed her child anywhere, public or private, that she and her child are otherwise allowed to be. However, with the exception of a few states (CT, DC, NJ, VT, & WA), there exist no enforcement provisions. This means that as soon as a woman who is legally breastfeeding her child is asked by a business owner or security to leave, she is then trespassing.

Other countries (i.e. Taiwan, the UK) have fines for those who would interfere with a woman’s right to breastfeed; the US should as well.

A woman should not be forced to hide, whether under a fabric cover, in the restroom, or in her car, simply because she elects to breastfeed her child. At its core, this is an issue of discrimination and should be treated as such.

Please help us by signing the petition!
And by sharing on Facebook, twitter, and Instagram by hash tagging #ENFORCEOURRIGHT & by helping us to spread the word!
We need full protection from discrimination!
Thank you from the bottom of my heart for the support that this community gives other women!